well there i was looking for a cheap cooler to experiment with and one just dropped right into my path.
the charity i volunteer with does a biannual yard sale and somebody donated this junk cooler. it's intact aside from broken hinges and i can create something that works to replace them.
so i bought that along with some books and a toaster oven to replace the one that spontaneously quit heating last week.
and both my cast iron dutch oven and cast iron deep pan with a lid fit in it at the same time. whee!

so one weekend i'll lay some cork in the bottom and line it all the way around and the lid with the mylar sheet.
Posted by catastrophegirl at 10:08 PM No comments: 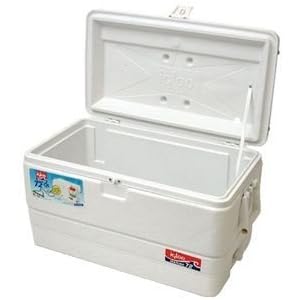 http://tinyurl.com/y7hrayw
the long low body lets more sun in
the marine cooler specs say these coolers resist warping and cracking with extended sun exposure [kind of a must for a solar oven]
there are a variety of sizes and shapes with varying descriptions on amazon. i'm thinking of heading to the boat store some weekend to put my hands and measuring tape on some of them.a couple of them say they have lock in place hinges/lid supports which would be ideal for the solar aspect.the other thought i was mulling over was how to protect the bottom of the cooler from what i hope will become a VERY hot pot of food.

still torn between an inch of cork covered in mylar or silicone mats [or a layer of silicone square potholders since i can often find those on sale]
and don't worry, an inch thick cork rectangle is really easy to find. ikea makes a set of trivets for super cheap.

there's one on the left side of my glass topped stove right now, acting as a lid/pot rest when i have to remove things from the heat. putting a hot pot on a cold glass stove is just begging to have a nasty incident.

i think this weekend i'll do a small scale test with a mylar emergency blanket that's in my camping gear, a small cooler i have and my littlest all black cast iron pot and some water.

i won't make it permanent though because that's not a large enough cooler for actually using a pot that could hold a whole meal. and it's brand new, only been used to transport gelatin edible hearts and 'blooderfingers' to the set of a zombie movie ... but that's another post for another time
Posted by catastrophegirl at 2:07 AM No comments:

another idea while driving

just driving down the road and BAM, right to the back of the head. gotta tell you, unlimited texting to email myself ideas like this has saved many a useful thought from being lost to my wandering mind

wait, this is another of those ideas i have that i assume would be obvious but actually aren't isn't it? went to look for plans to make a solar oven/"haybox" combo out of a cooler. why aren't there any plans? seems easy - make a solar oven out of a cooler with a 'solar lid' and then when needed swap it for the insulated lid for a 'thermal haybox' that can also be used on sun-free days. one box, fewer used resources.

the basic thought so far:

cheap cooler with a hinged lid
line the lid and inside with mylar
make a frame to fit the top with a sheet of glass in it
black cast iron pot with a lid. the pot needs to be not too much smaller than the cooler itself to function effectively as a haybox.
a rack to set the pot on to keep from melting the plastic of the cooler

my dutch oven is still too new and grey, needs a few years. i will likely have to buy a preseasoned one or search thrift stores
Posted by catastrophegirl at 8:20 PM No comments: