Hard Working Fridge gets a makeover

technically, this is a completely different fridge than in the first post about what i do to my poor fridge, but it's not a new fridge to me anymore - been using it for well over a year now.
the side by side 25 cubit foot fridge was too big for me. short little ol' me couldn't even reach the back of the top shelf of the other fridge.
so it's been donated to a friend who needs that much space and i am using a top freezer 18 cubit foot GE that i adore.

with, as you can see, the same messy system for a long time.
it's wet erase markers, not dry erase, so that minimizes accidental smearing. but if i need to expand a list, like i want to stock up on a whole bunch of stuff at sams club in one giant shopping trip, i had to erase a bunch of headings and lines to make the box bigger. 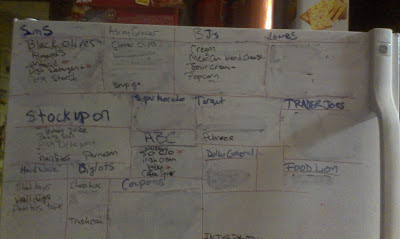 then i found a sheet of magnetic backed printable paper - leftover from another project. i didn't run it through the printer, just made headers with sharpie. now if i need to adjust the space sizes, it's much easier to just move things around 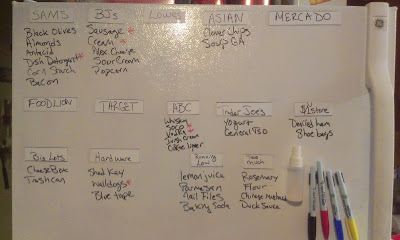 SOOOO much tidier and easier to read/use.
the blue marker used to be for lines and i rarely used the yellow - it doesn't show up well on the fridge. i probably need to remove those.
red stars are for things that i really should get soon.

the water bottle is for spraying the washcloth [not pictured] that i use for erasing- it's held on by putting a magnet on the fridge and a magnet in the bottle. the washcloth is held on with a magnetic bulldog clip.
the wet erase markers are stuck to the fridge with magnetic pencil holders from american science and surplus - item number 34249P25

to get the fridge REALLY clean between markings, use alcohol after you erase with water.

and yes, i do often just take a picture of the fridge on my camera phone on the way out the door when i know i will be shopping after work or while running errands. then i can just pull up the picture, zoom in, and there's my shopping list.
my roommate writes things in as needed too.

my favorite part of this list is also the "running low" and "too much" sections - if i see a sale on lemon juice i will know it's not a bad idea to buy it because i don't NEED it yet, but i will soon enough. and if i see a sale on rosemary, i will remember not to buy it, no matter how good the price, because my friend has a rosemary bush and cut me off a few pounds last year that i dried and have in mason jars in my pantry. but it's also a reminder to look for things that go well with ingredients i have too much of so i can use them up!

courtesy of my large collection of vintage how-to, DIY, helpful hints, home repair and craft books, i want to share some of the break it to fix it tips i've learned.

1.  casters falling out of your furniture legs? saw a notch to about halfway down in the caster's post and spread the resulting pieces just enough to increase tension on the inside of the furniture leg and keep the caster in place. it will still be able to swivel but not as likely to drop out.

2. pests in the cabinets? they can get to places you can't and hang out under the cabinet, behind the toekick. if you aren't going to make a toekick drawer, then drill small a hole in the toekick or in the hardboard/wood floor of the cabinet that you can fit the nozzle of a can of bug spray up to. whenever you do your normal pest control [more often in some places depending on the weather and how old your house is] then spray through the hole too. in between treatments, plug the hole with a dowel or a furniture dowel plug to keep from inviting in extra bugs.

3. bend the wire handle on your paint can to fit around your paintbrush handle. snap the brush into the bent place on the wire handle when you need to put it down without making a mess as the paintbrush will be resting over the can, but not sliding down into the paint.
Posted by catastrophegirl at 2:41 PM No comments: