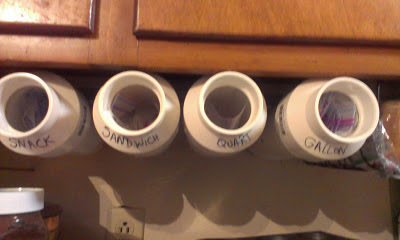 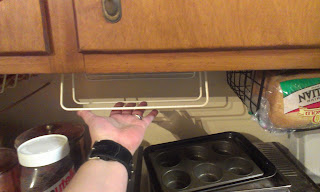 once upon a time i kept my food storage bags in a wire rack i had mangled for the purpose, cramming the boxes in any which way they'd fit and dealing with baggies sliding out and onto the kitchen counter on a regular basis. 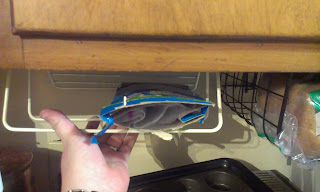 as you can imagine, i could only fit 2 boxes in here, and that meant that gallon sized and snack sized bags lived in their boxes on the counter. in the way. all the time

one day it just hit me. POW! the baggies are inserted into their boxes at the factory in a roll. pipes are round. i bet i could make a bag holder out of pipes.
i measure the space and figured i had a little over a foot of space to work with.
4 sizes of bags, just over 12 inches of space... 3 inch pipe!


i am a great procrastinator, so i actually bought the parts about a month ago and didn't do anything with them until last night.


so that's just under $20 after taxes.
the remainder i had in my utility room/scrap pile. you might need to go buy screws or bum scrap wood off a friend or scavenge your local resources. you might even need to buy a cheap board and cut pieces off it as needed for future scrap wood. personally, i used the kick plate from a pressboard bookcase that fell apart years ago. i saved the shelves and bits and cut them up as needed.
scrap wood as long as the width of all the pipe pieces laid side by side, plus a couple of inches, and narrower than the shortest pipe section. you need to attach the pipes to it but still have room to put the caps on. 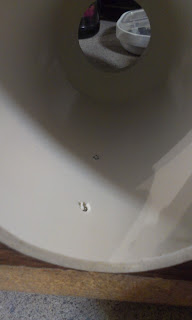 4 screws long enough to go through the scrap wood and into but not through the underside of the cabinet where you will be mounting your organizer. wood screws are best. i didn't have the right length of wood screws so i used machine screws. poor choice, but i'm not using them to hold anything heavy or fragile.

fortunately for me, all the screws i used for the whole project were all the same size. i do not know the size of them as they were just loose screws i had leftover from an assortment pack.


measure how long your bags are and decide how much pipe to spare for each one. you might be able to buy a longer pipe or a few shorter ones - i went with the cheapest option. the sandwich and gallon sized cuts were about equal to each other, with the snack bags being a little shorter and the gallon sized bags being much longer. i measured the width of the bag as they will be loaded in sideways and pulled out by the side seam, not the zipper opening. also, the actual width of Ziploc snack, sandwich, quart and gallon bags laid side to side is longer than 2 feet - just decided it was ok for some to stick out the back of the pipes. if this bugs you, and you need all three sizes of baggies, get more than 2 feet of pipe.

i ran masking tape around the cut lines and marked where to cut on them - the masking tape is also there to reduce the burrs you create with the saw. it won't eliminate them but it will reduce the roughness of the cut edges.
if you, like me, don't have suitable clamps, throw some gloves and eye protection on a friend or roommate and ask them to hold the other end of the pipe steady while you cut.
i also braced the end i was cutting off against my kitchen cabinets to try to minimize the vibration, but in respect to kitchen cabinets, this is a terrible idea. mine weren't damaged but yours may be
point the saw away from people and hands and things you mind getting damaged. 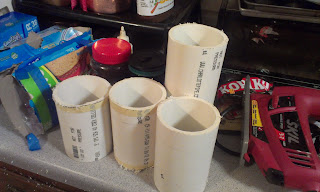 i used a jigsaw with a blade designed for pvc.  you can see my handy Skil saw in the picture above. everyone should have one.
i cut into the pipe and then my roommate and i rotated the pipe against the blade to complete the cut. it's not perfectly smooth or even but that's ok because that part won't show.

sand or scrape the worst of the burring away. 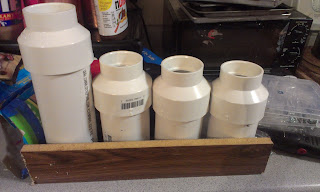 line up your pipes, with the caps on to get the proper distance, and line up the scrap wood to mark along the center lines of the pipes where they will be attached to the wood. 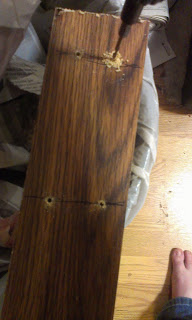 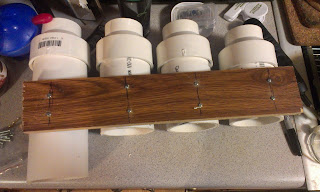 the tall pipe on the end? i didn't attach it in that position. i moved it "down" to make the opening closer to lining up with the openings of the shorter pipes.

notice there's a little more space between the two end pipes and the center pipes. that's where i decided to attach the wood to the cabinet and i needed space to fit the drill and screwdriver. 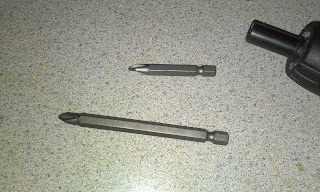 you will either need a long screwdriver (manual) or a long bit or bit extender to reach in the space between the pipes. 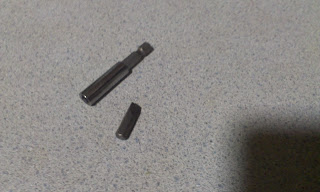 then i installed it and put the bags in. then i took it down, moved it forward two inches because i didn't measure properly and the gallon sized bags stuck too far out the front and the cap wouldn't go on. 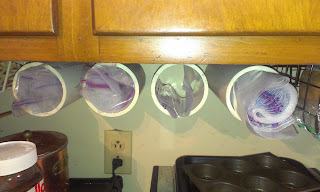 then i cut a couple of cardboard discs and masking taped them to the back of the sandwich and snack bag pipes because with it moved forward, the little bags were falling out the back. 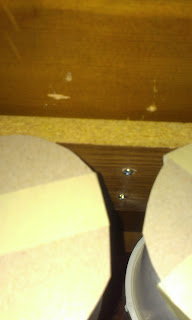 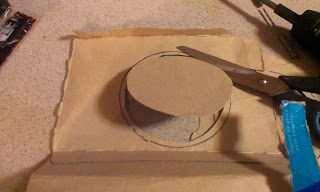 if you want to get fancy and put caps on the back ends:


THEN i loaded up the bags, stuck the caps on, discovered that the quart sized tube was in just slightly the wrong place to make it easy to put the cap on but it worked ok with a little shove. you may want to measure more carefully for your installation to ensure room to remove and replace the caps. i don't care enough to move it again since the cap will come off it a few times of year at most. 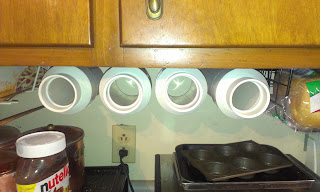 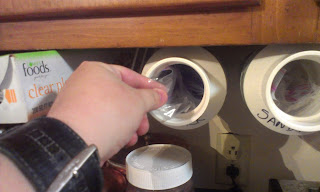 yeah, this is much better!