hanging around the fridge

a while back i started thinking about hanging spray bottles off the side of my fridge. i even wrote a little bit about the idea but it didn't get much of anywhere. i tried things, played with materials around the house but kept ending up dropping stuff on the floor when it didn't work 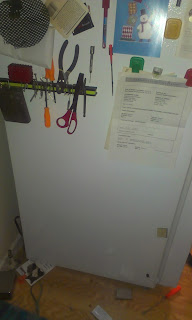 old cafe curtain rod that came with the house, hanging in a magnetic cup hook: rod popped out easily 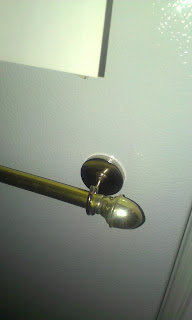 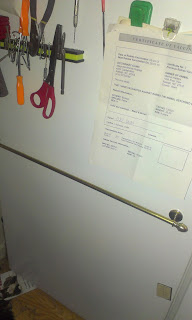 added a rubber band to keep it on the hook: hanging more than one bottle resulted in the weight bringing the whole thing crashing down 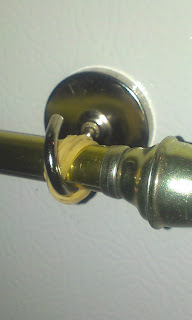 so i went to harbor freight and got a couple of inexpensive 90lb pull magnets, screw eye bolts and nuts and made this: 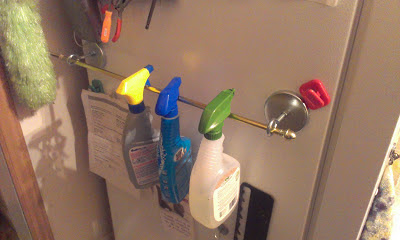 same cheap cafe curtain rod, and since this photo was taken i added a roll of paper towels on the rod too. the finials come off the end of the curtain rod so i just popped one off, slid it through the screw eyes and popped the finail back on. it has fallen down once, when someone ran into it... with a box spring.

if you don't have a curtain rod like this lying around, they are very inexpensive. you could also use pvc pipe or a broomstick or dowel, but those might slide out the end of the screw eye unless you use a rubber band for friction (or something else)
Posted by catastrophegirl at 8:28 PM