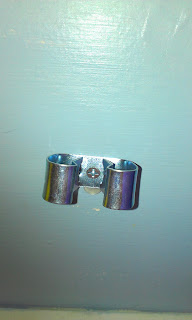 this is a broom clip. or a "spring grip clip" if you prefer.

this particular one is also installed with a rubber bumper dot behind it on the bottom, to ensure it stays tilted slightly. you can sort of see the dot at the bottom of the clip in the picture.
that's because this one is a razor holder on my bathroom wall. the razor isn't tightly gripped by the clip so it needs a little gravitational assist. but the razor had to be moved out of the reach of my bitey cat and this was on hand. much less expensive than a fancy razor holder. sure, it's not the ideal stylish thing, but it works quite well. 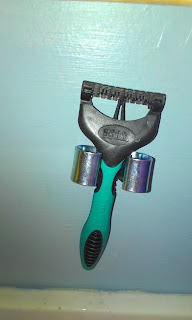 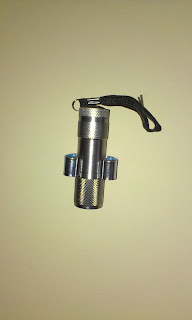 last year i picked up a ten pack of these cheap [that includes quality] LED flashlights for camping with some kids.
a few of the flashlights still work and my house tends to have plenty of power outages due to the rural nature of the neighborhood.
so i keep them on hand for emergency lighting.
a ten pack was $10 at Big Lots.
i've seen these lots of places and prices vary but more than $2 a flashlight and you are getting ripped off [if it doesn't have batteries] 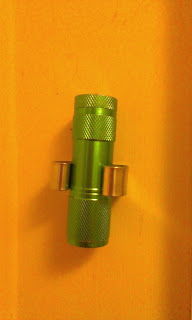 one day i had both an LED flashlight and a broom clip on my kitchen counter near each other.
as one is wont to do with sudden impulses, i followed mine and discovered that yes, tiny cheap LED flashlights DO fit in a broom clip.
so i put a couple on the walls near the front door and the kitchen door.
very handy place to have a light whether you are coming home to the power out or need to go outside and chase a possum away from the trash can, there's always a light right there. 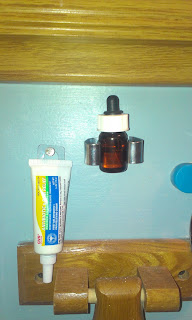 next to it you may also see the successful results of my experiment with hanging adhesive tabs, but that's another post entirely 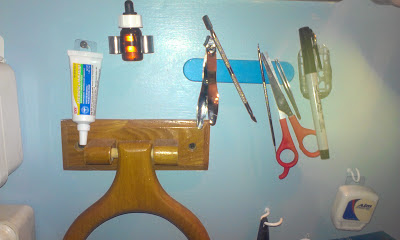 off to the left, out of frame, are the two first aid boxes - they dismount from the wall for emergencies and camping trips.

then neosporin on an adhesive tab, tea tree oil in a broom clip and a little magnetic bar from ikea [oh, ikea, i love you so much] with nail clippers, cuticle tool, comedo toll, scissors, tweezers. in the bottom right corner is my roommate's dental floss that i also stuck an adhesive hang tab on. she may not keep it that way, but i wanted to see how well it held. her dental floss is another thing that tends to get batted into the sink by bored kitties. and at the very bottom, out of frame, is the lint roller on a cup hook.

i tried to get more broom clips at home depot, but they don't carry that kind. they are pretty inexpensive, rarely as much as a dollar per clip, and they usually come in a pack of 4 or 5.
if you want to get extra fancy and spend a little more, they come in vinyl coated but i don't bother.
Posted by catastrophegirl at 1:23 PM